The arrival of the Atlantic and Pacific Railroad in northern Arizona in the early 1880s opened the door for the movement of goods into and out of the region.  While the region was connected to the areas to the east and west, there was no rail connection to the south.  The Arizona Mineral Belt Railroad (AMB) was proposed by Colonel James Eddy in 1881.  The line originally was planned to begin in Winslow but later Flagstaff was chosen as its start point.  It was envisioned that the line would connect with the copper mining town of Globe.  At this point, Globe was not connected to either the Atlantic and Pacific or the Southern Pacific.  Some even felt that the line would eventually go as far south as Guaymas, Mexico and north to the Utah Central RR which would create a continuous line from Mexico to the Pacific Northwest (Trennert 1970).

Eddy was eventually able to get the Atlantic and Pacific to commit to financing the initial construction of the line.  A large concern for Eddy was the question of how to deal with the construction of the line down the Mogollon Rim.  It was decided that a tunnel would be bored through the Rim.  Work on the tunnel began in 1883 prior to any grading being done. The funds committed by the Atlantic and Pacific ran out after 70’ of the planned 3100’ tunnel had been completed (Trennert 1970).

No further work was done until 1887 when the Atlantic and Pacific once again committed more funding for the project.  Approximately thirty-five miles of line were completed to the Mormon Mountain area.  The funding was abruptly cut-off  once it was discovered that Eddy had sold $100,000 in AMB stock to a Chicago businessman (Schuppert 1993). There were newspaper (Beatty 1956) references as late as December 1887 stating that work would resume but it never came about.

The 1895 map below shows the AMB heading south from Flagstaff and ending at Fulton. Trennert (1970) states that a "railroad station for passenger and freight traffic" was established about ten miles south of Mormon Lake at the "crossing of the Winslow and Fort Verde Road".  This would be roughly where Fulton is shown on the map.  Schuppert (1993) as being just south of Mormon Mountain and being little more than a wooden cabin.  Email correspondence from a local historian with longtime family ties to the area suggests one may not have existed.

There is a very short section of abandoned grade that can be seen directly across the street from the Circle K on Lake Mary Road.  It is just behind the bus stop.  New development has obscured or removed all evidence of the line for a short stretch but the grade can be found in the drainage between the apartment complex and the fire station on the west side of Lake Mary Road.  It again is lost at the soccer field on South Wild West Trail in the Ponderosa Trails subdivision but it reappears shortly after and is adjacent to the paved walking/biking path leading west from the soccer field.  It soon turns to the southwest.  At this point it is a very noticeable large berm although it doesn’t stand out too well on this aerial image.

This next photo is this berm from the bike-path visible on the Google Earth image above.

Short portions of the line can be seen passing through yards along West High Country Trail.  It is visible in these next two photos.

The line continues from just west of the dead-end of West High Country Trail and goes down toward Pulliam Airport.  The next photo show this section of the line.

It is a bit difficult to see but, on the above photo, the main AMB line is to the left and another line is forking off to the right.  Here is another photo showing this right fork.  This line quickly enters the off-limits airport property so it can't be followed much past this point.  I've not seen this line shown on any maps so I'm not positive where it goes.  I've heard some speculation that it heads down to the large east-west trending draw that is north of  Mountainaire and ends near Lower Lake Mary and was used for the construction of the original dam.

The line from southwest of the airport to the north end of Lower Lake Mary is fairly easy to locate and follow. It heads southeast from the airport before it veers south and then back to the southeast.  The road beginning near the upper left corner and continuing to the lower right corner is the line.  It is now a dirt road but doesn’t receive much use as it pretty much dead-ends at the airport (when heading in a north-westerly direction).  It makes the southerly turn near the well-defined dirt road in the lower right corner of the image. 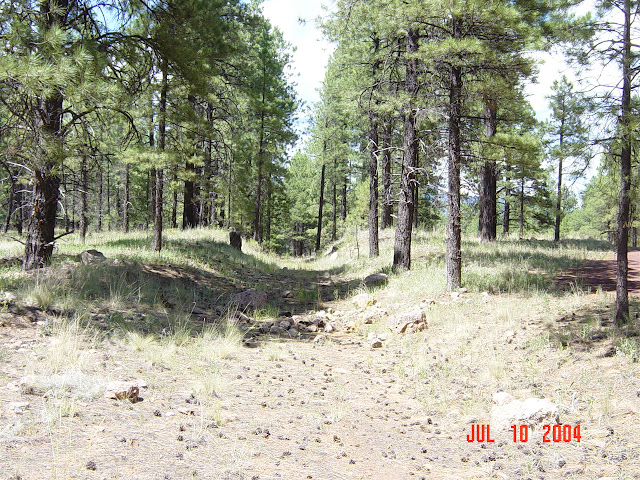 Just prior to Forest Service Road 132 the line makes a sweeping turn to the east-northeast.  It can be seen, in the center of the next image.

The line is adjacent to Forest Road 132 as it heads northeast and enters what is now Lower Lake Mary.  During dry periods the grade can be followed down the middle of the lake bed.  Water has somewhat leveled the line in places and these sections are usually most easily defined by subtle differences in vegetation.  The line, along with two wyes, is visible on these subsets from a 2007 black and white U.S.G.S. digital ortho quarter quad.  There is an old buried water line in this area which can be confused with the grade. 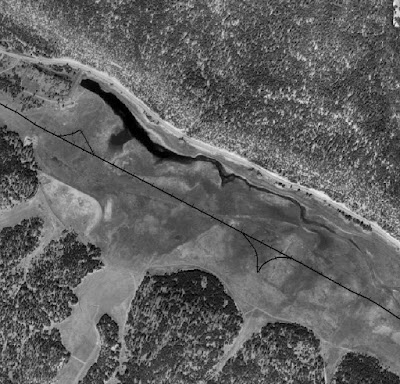 The grade continues down Lower Lake Mary but becomes difficult to see near the dam on Upper Lake Mary.  In 2008-9, the southern third or so of Upper Lake Mary was almost completely dry.  The AMB grade really stood out.  There are some substantial concrete abutments on a few of the places where the line crosses small drainages.  Below is a 2007 aerial photo that shows a portion of the grade becoming visible as the water level in the lake went down.  The AMB line continues to the southeast while the Flagstaff Lumber Company line can be seen, in the lower right corner, heading roughly south.

Much of the route of the original AMB can be followed to the area between Upper Lake Mary and Mormon Lake although it is difficult to know exactly how far south the line actually extended.  I’ve seen a map showing it is on the east side of Mormon Lake, another map showing it is on the west side of Mormon Lake just east of Mormon Mountain and ending down in Fulton Canyon, and a third map showing it ending in the general location shown on the image below.  This location, in UTM Zone 12, NAD 83 is 457195, 3873730.  The line running roughly north-south in the above picture is the Flagstaff Lumber Company grade.  It meets up at this point with the original AMB line.

Posted by Arizona Rails, Ruins, and Trails at 10:33 PM